LA Writers Group has facilitated creative writing workshops in Los Angeles since 2003, and as of August 2019, we also offer writing retreats in San Diego (Carlsbad - North County). We also offer many online workshops via live video conference (Zoom), email-based writing challenges, and coaching programs for writers who are ready to finish their first draft.

We support, encourage, and inspire writers of all genres. We’ve helped many writers establish or reestablish a productive and creative mindset, fill their pages, and learn their craft through our creative writing workshops and private coaching. We don't believe in the tough-love approach. We believe in empowering writers to explore their craft.

We only pick leaders who lead our writing workshops with love. We hire exceptional group leaders who are adept at engaging small groups of writers. We screen them for their expertise, their diplomacy, and their belief in positive reinforcement. We believe writers need a safe space to grow.

Check out our new monthly one-day creative writing retreats. Do not wait to sign up. There are only 8 tickets available each month and they will sell out. 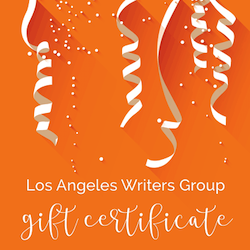 Can you write 200 words a day for 100 days? Our newest writing challenge is now evergreen, which means you can sign up the moment you’re ready!

We are starting up new creative writing workshops in Carlsbad, CA in August 2019. See our San Diego Writing Workshops.

I believe if we are meant to work together, we will, and because of that, I don’t believe in high-pressure sales tactics. My consultations are all about getting to know if we are right for each other.

Schedule a free consultation with Nicole.

Nicole, I want to thank you for your thought provoking and active participation as the facilitator of this incredible 15-Day experience! I began this workshop with lots of apprehension which was similar to how I tackled my writing, unfortunately. But, with your energy and tenacious daily prompts and up-to-the minute feedback, I was able to defeat the writers block that I often found myself in! I’ve been writing everyday since your workshop and I’m happy to say that I have actually completed two articles that I am preparing to submit for publication! I am incredibly grateful to have had this opportunity. Thank you so much for your enthusiasm, professionalism, and mindful energy that you brought to this 15-Day challenge! I’m actually considering doing it a second time!

It is always a pleasure to gather in this intimate setting with a few writers who want to read literature, together. In this sacred space, we go further and higher when we read out-loud and talk about what makes a particular piece so moving. Then, we can all come alive with inspiration!

This is the best writing organization you will find!! I'm from Michigan and contacted Nicole about private coaching in 2015. Our first meeting/consultation was incredible. I felt like we had been friends in a past life. Nicole is genuine and is truly an expert in the craft.

We met via "Zoom" during our sessions, and she allowed me enough time to finish my edits and set up a meeting when I was ready. In terms of experience, she meets you where you are. She listens and edits carefully to fully understand what you need to do in order to move forward. In the sessions, we had a dialogue. She was not preaching to me or lecturing. Her unique ability to explain and teach helped me retain the information she gave me.

"I had taken every writing class I could find both online and in-person for over three years, yet I was still floundering around with an unwritten novel in my head. Frustrated and skeptical, I went to yet another class and met Nicole Criona - and everything changed. First Draft Incubator was different. And her one-one-one personal attention was just what I needed. With her kindness and gentle encouragement, before I knew it I had an outline. She was so generous with her ideas and so sure of my ability and our way forward that I believed her. And it worked. Three months later, I had sixty written pages with a clear idea of where I was going. Every week, she helped me hurdle stumbling blocks and climb out of writing bogs that threatened to stop me in my tracks. Now, here I am, sixteen months later with a finished first draft. It is the single biggest personal accomplishment of my life and she is the reason I got here. The joy is real! I cannot thank her enough. Nicole, you were the flashlight in my darkest forest. We did it!!"

Carrie T. - Fledgling Author, soon to be hopefully be published.

Nicole understands that working with writers doesn't just involve talking about their project. She has the rare and brilliant skill of sensing what is really at the root of slowing a writer down and is more than willing to get into the messy and seemingly "unrelated" discussions that surround every writer's process. Working with her for these past three months has enabled me to minimize the confusion and frustration that always arises in the writing process and get back to making progress on my book faster. Instead of spending days of energy in emotional defeat, I spend an hour on the phone with Nicole and find my way back to the work at hand before evening time. She is a miracle worker, and her diagnostic skills are up there with rocket scientists. I'm not exaggerating. She's brilliant. Few people in the world have as much passion and grace when it comes to teaching the craft of writing. She also has an awe-inspiring ability to work with a widely diverse range of writers and personalities. Working with Nicole was the best investment in myself and my writing aspirations I could make.

Since I began working with Nicole, she's provided valuable coaching and feedback every time we've met. I came to Nicole with a few ideas scrawled into a Moleskine notebook, and six months later, I proudly printed out the first draft of my manuscript. With her guidance, I've been able to propel my story, characters, and prose to a level I could not have achieved on my own. I cannot recommend working with her highly enough!