An interview with Tracy DeBrincat 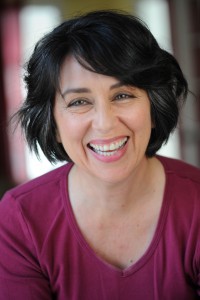 When did you first consider yourself a “Writer?”

I realized the power of being a lower-case w writer in the third grade, when I wrote an essay based on the storyline from the then-popular stage musical, “Hair.” I was a total plagiarist – hey, I was only 9! — but I was definitely experimenting with story already, writing about a guy falling through a hole in the flag and expanding his mind with drugs. The only comment from the teacher was a red circle around a misspelled word. I think it was “virgen.” My parents were called to the principal’s office.

As far as being a capital-W Writer, I had the sense that I could write and had a future in it when I was accepted into UC Berkeley by writing a Dear Ann Landers letter about how I hated writing college application letters.

And of course there was the thrill of my first published prose – in a ‘zine called “Diabolical Clits.” That little stapled mag holds a special place in my heart. It’s only been recently, since my novel was published, that I’ve developed the pistachios to say I’m a Writer before anything else.

Where do you find or CREATE inspiration for yourself?

I got myself into a weekly generative writing workshop and stayed there for almost 20 years. That guaranteed that I was in a chair for 3 hours a week devoting myself to learning and practicing craft. From that chair, in the stimulating and supportive atmosphere of that workshop, I wrote a bunch of things that became poetry, short stories, a couple novels. From there, I developed the confidence to send out my work and start attending conferences around the country to expand my horizons.

For daily creative practice, I have these magic headphones. It’s not the actual headphones that are supernatural, but the act of putting them on, opening a document and playing a track of binaural beats that mess with your brain synapses and force you to focus. I don’t have a lot of time to write every day, but I do it consistently. I’m wearing my headphones right now.

I also make it a point to shut the computer and do things that are both inside and outside the writing experience. Go to readings, get out in nature, sign up for unusual courses of study that are tangentially related to projects I’m working on or thinking about working on. And I do make an effort to schedule time to get away by myself. I love being alone with my project.

What is your idea-generating process like? How do you know when you’ve landed on a theme or idea or story that is YOU and that you’re excited to spend an unknowable amount of time and energy on?

Usually during some kind of workshop or during the process of paragraph 3 in the previous question, I’ll come across something uncomfortable or awful or sad or vaguely interesting within myself. Let’s call it…an Emotion. Ick! Then, rather than deal with it personally, I’ll stick it onto a character and let them deal with it. It’s way cheaper than therapy. It keeps me interested because as I wrestle with their issues, I grapple with my own. None and all of my work is and isn’t autobiographical.

Revision is my favorite part of the writing process! It’s when the story happens. It’s when I collapse a lot of meh scenes into one multi-layered one. When nothing-happening moments get cut, cut, cut. Sometimes I’ll write a whole story, then find the truest part of it and just start all over without referencing the initial draft. I’m always surprised to see how many of the same ideas and phrases remain but in different shapes. I’ll share it with some trusty readers – one or two – and then bullet out an outline. Once the flow of scenes is there, I’ll start looking at sentences and words.

What advice do you have for writers just starting out?

Just freaking write as much as you can. Give yourself the gift of making it feel like play. Don’t worry whether the work is good or bad. It’s all an experiment. It’s all leading toward the next thing. Develop your muscle, the experience of just writing words across a page (notice I said page, not screen) and seeing where it takes you, day after day. Create and find and tweak your writing habit until it’s automatic. Don’t be afraid of feedback and when you do get feedback, don’t take it personally. Try not to compare yourself to others. Drink plenty of fluids. Nap whenever possible.

Learn more about or register for our Access Your Inner Genius Workshop here or read Tracy DeBrincat’s full bio.